The Importance of Symbol Mastery and Learning the Meaning of Words

I have a son who is dyslexic. He went through the Davis Young Learners Program when he had just turned 7 with a fabulous facilitator.  When he was 10 years old, I was in training to become a Davis Facilitator.   During this time, I did a math program with him.   Because I was still in training, I didn’t understand the importance of each piece of the program and I believe I skipped over some of the fraction pieces because he hadn’t started doing this in school. I also became so busy with my training and working full time that we never completed all work with the trigger words for math story problems.  It is necessary to work with these trigger words so the student can create the meaning of the words.

My son is now in 8th grade: he is doing very well in language arts, he writes beautifully, he reads well with excellent comprehension and in math, he has been getting high marks.  His math teacher even said to me that my son has a great mind for math; he just needs to believe in himself a little more.

I thought he was on a great academic path and then last weeks’ homework happened. As he was doing homework, he asked his older brother some questions and his brother answered the questions with other questions to try and get him to think through the problem. I was having a proud mama moment; my older son was truly trying to help.

Then all of a sudden, I hear a loud, forceful voice say, “I already told you”.  I gently asked if he was using his tools, which was returned with a glare of an irate teenager full of disgust. Okay, I see that mom needs to stay out of it! I tried, I truly did, but as he was reading the story problem question back to his brother and telling him what equation he made out of it, it was obvious to me that the confusion was due to trigger words, so naturally I had to butt in.

He ended up working through the problems with me making sure he had a clear picture of what the meaning of each of the words were and to be sure he knew what was being asked for in each question. Then I told him we could fix his frustrations by modeling in clay the words that were causing confusion, just like we used to. He was up to it and we spent the weekend playing with clay and cutting up circles of clay into fractions.

Learn the Meaning of Words Through Pictures

Do you know “by” in math can mean to multiply, but it can also mean divide?   During the homework fiasco, it was clear that my son didn’t know the second meaning of “by” meaning divide, which was needed to get the equation correct. The other word that was causing confusion was “of” when working with fractions.

I hadn’t seen him break down into this “self-hate” in a long time; he kept saying how stupid he was under his breath. He could do the math, but translating words into a math problem requires one to have a clear meaning/picture of each word. That is what the symbol mastery does, it gives meaning to words.   So learning the meaning of words that don’t produce a mental picture is extremely important to picture thinkers.

Math has a language of its own, but it is more than just numerals and function symbols, the words we use for math to describe functions are just as important.  By using clay to mold and create the meaning of the word, we get to understand, know and master a word at a very deep level. After doing this work, that word no longer causes a problem. 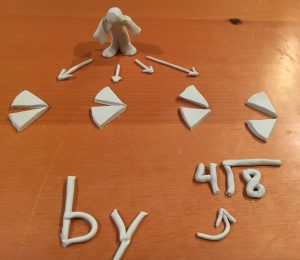 “by” in math can mean divide 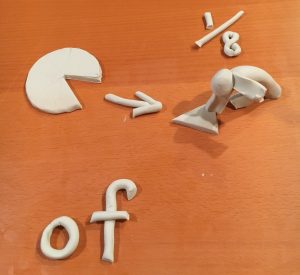 “of” in math can mean a portion or fraction taken from